Howard sent me a rather good Logic question...

"you know how in ProTools during a playback, the meter for that track stays constant depending on how strong the audio file is and not dependent on where the fader is....and in Logic, that same meter display varies depending on placement of the fader...ya feel me?

anywhoo, i looked in the manual and had no luck...?"


The answer is rather hard to stumble upon so here's how to do what the H-Man wants to do.

To get Logic Pro 8 to show the channel meters pre-fader style you first must right click on the transport bar in some of the dead space to bring up the Customize Transport Bar options as shown below. 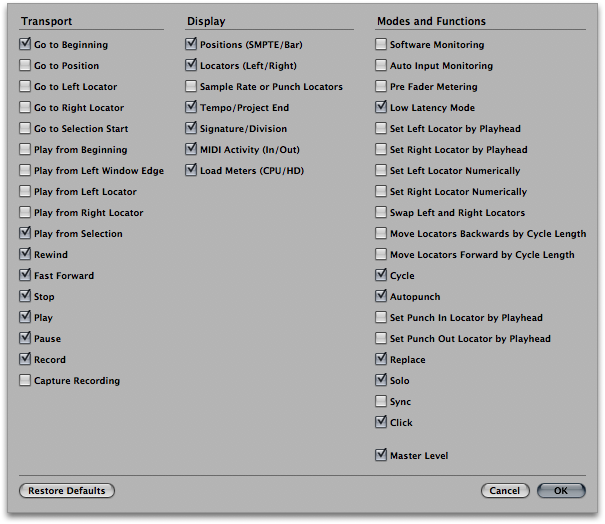 You should then turn on the Pre-Fader Metering button listed below the Modes and Functions list.

It will add a button to the right of he transport bar that when switched on changes the meters from post fader to pre-fader. 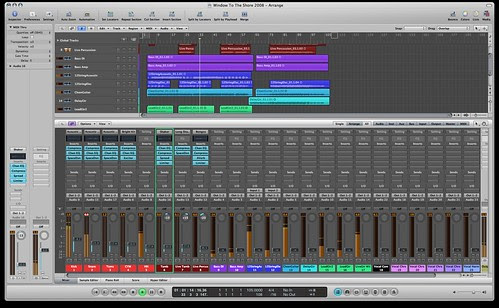 I'm glad Howard made me think of this because it is one of the things I was use to seeing in Pro Tools and hadn't noticed I was missing it in Logic.

And now I can switch at the touch of a button in the Transport Bar.

Mixing In Logic Pro... Episode One.

Some advice for mixing in Logic.

Since I've switched from mostly recording with Pro Tools to using Logic I've found a few things help me make the transition.

1-Logic lets you have a lot of tracks so use 'em. When I find a need to make one section stand out in some way I'll take one of the instruments and use it on a second track to allow for a brief change in the character of the mix. Don't be afraid to have a boatload of tracks in a Logic Session.

2-Don't waste the horsepower of your machine. Be sure to use strip silence or manually remove sections of dead air on all your tracks. The reason to do this is Logic, unlike Pro Tools only uses effects when there is audio on the tracks.

3-Don't waste the horsepower of your machine. Use the freeze track option. It does some weird stuff sometimes but most of the time you'll gain some more power back. Works best if your session is on a fast harddrive.

4-Under the view menu you can add more to the track header including track freeze and colors.

6-You can assign a second tool that will be used when you hold the command key down. Holding control and option will switch to the zoom tool. Hitting esc will let you quickly change the main tool. Holding command while selecting the tool will choose the second tool. The fade tool is handy for cleaning up tracks before mixing.

7-I usually start my mix by having the kick and snare drum alone at about -10db to -6db then build my mix round that. If I need to lower the overall mix I'll hit the X key and drag across the track names on the mixer so I can pull them all down without using a group.

9-Some of the channel strip presets and Compressor settings are great but you'll need to adjust the threshold of the compressor to work with your tracks.

10-The compressor has several different models that can have a very strong effect on the sound and feel. (I think these are some of the different Circuit Types-VCA=dbx160, Class A R =Focusrite Red, Class A U Urei, Opto=LA2A ish)

11-When in doubt try a tape delay. I love that fuckin' thing!

12-check the extended paramters on the plug-ins. Hit the disclosure triangle to see them.

13-Remember you can and should go back later and use Soundtrack Pro, Waveburner or another Logic session to master your tracks so you don't have to worry about the overall level while working on your mix.

Can we leave the lunatics in charge of the asylum already?

The Fall (Not just a time of the year.)

Why are we still in Afganistan and Iraq? I have an idea...

Potheads don't do much on there own.

Tell me again how smart your cat is?

I found a useful piece of software to control internet cravings.
Get it here.

I found the audio file that was causing Logic Pro 8 to have a fit every time I tried to work on Catch The Sun so I can finally move past that! Yeah!

I'm spending some time cleaning up my new Marqui Adora song database I created with Bento. 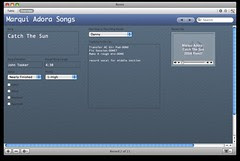 Can I help you with that?

Best interview? Steve is not happy....

Why does Facebook seem like visual vomit to me and not everyone else? And what the fuck is a poke? Do I need to see a doctor after being poked?

Portishead play Third in the studio...