The most important dance song ever.


Slagsmålsklubben - Sponsored by destiny from Tomas Nilsson on Vimeo.

Here are some features I'm looking for.
-Ugly
-Covered in stickers telling me how great the internal parts and software are.
-No way to learn how to use the included software.
-I'd like to pretend to be an IT person and install tons of virus protection software.
-I'd like to see a few billion "helpful" pop-up windows.
-I might need conficker...
-Cheap plastic enclosure please.
-I'd like every piece of software to live in it's own little island of design, sharing no common interface ideas or sharing data.
-I don't want to be cool.
-I am not a member of the screen actors guild.

Some music I think you should hear: Pearl Jam Cover

Some music you should hear: Elvis sings AC/DC

I've got another puzzle for you...

Can we bail out of the bailouts?
What if we let companies that are 'too big to fail' do just that?

Someone is to fat and stupid to move themselves so we have to feed them...

As for the Banks in general:

They were bought by NationsBank in 1996.

They were bought by Bank of America in 1998.

Now they need a few billion in tax money...

Maybe we should let them fail and have 3 different banks again so when one of the three fails they won't be "too big to fail". Oh wait, then we'd have to let them fail first. Which is somehow a really bad idea?

So here's the plan:
1-Pay Taxes for services the government provides you.
2-Government passes laws allowing and encouraging Banks to do shady shit.
3-Government overspends on poorly planned wars and other related items.
4-Banks lend money to people and institutions that they otherwise wouldn't do because they are risky.
5-Econmey slows down because people no longer have money to spend since they spent themselves into debt at the banks expense. Now they have to pay those bills.
6-Banks can't get people to spend money they don't have or pay them back.
7-Banks start to fail.
8-Government "helps" banks that can't manage themselves.
9-Banks give out bonuses instead of pink slips.
10-People are surprised, government is shocked!
11-Government wants to Tax bonuses 90% rather then let that money at least be in the economy somewhere.
12-10% of the money that made it out of the Government is back in the economy and the rest is fed to the government again. And the government will spend some of it to re-spend it.

Result=Less money in our economy.

You fed the dog steak so the dog will protect your house. He gave it to the robbers. You caught the robbers eating your steak. The dog is outraged and demands 90% of the steak back from the robbers. The result is you will still need to feed the dog another steak because he didn't get his full meal... And all that extra work sure made him hungry!


NIN: The Making of the "Closer" Video from Nine Inch Nails on Vimeo.

A well written blog about the newspaper industry in the internet age.

I think it could also apply to the music industry in many ways. Click Here!

Atlas Shrugged moment of the day: The moochers get called out

Some music I think you should hear: Kinky LCD Beatles

Joe and Danny will love this one...

For my DJ friends...

iTunes 8.1 has a new iTunes DJ features something that could create a "social nightclub" kind of thing. The audience could start picking the tracks. 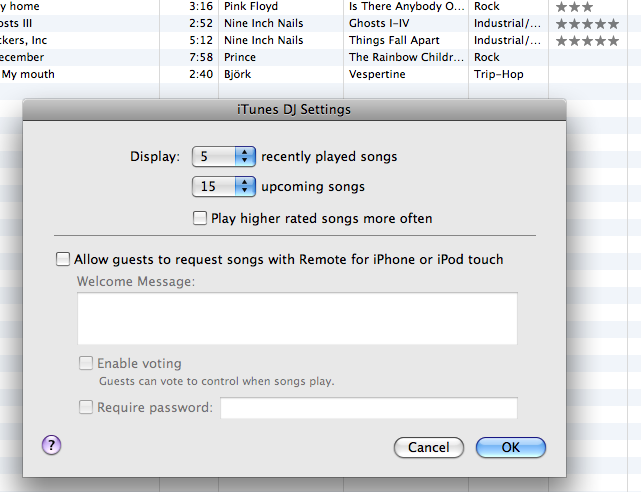 Should I start dancing the happy dance now? Could reason make a comeback in the USA?

How low can homes go?

This is why you might not find much new music to enjoy but you can listen to the same old crap forever!

The difference between two MP3s

Go to http://mp3ornot.com/ to test yourself!

Your Atlas Shrugged moment for today...

Let your little girl play with the prostitute dream home...

Barbie is a whore!

Some music I think you should hear. Youtube remixed

This is amazing. Just watch them.

Good news:
We have some new songs that are real close to finished.

Gooder news:
We seem to have hit upon a method for working on new music even with our widely different schedules. So while we had planned on continuing our break for the next several months, we will more likely have some new recordings for your ears soon. In fact we recorded vocals for And it Begins today which means that song is a few steps from the finished pile. (Several others are almost to that point as well.) We plan on collecting a few of these into an album to be released in the next few months. After that we plan on keeping the momentum we've maintained for the last month and stretching it out further. Like anything else our plans are always subject to change...

Think of 15 albums that had such a profound effect on you that they changed your life. Then, when you finish, tag 15 others, including myself. Make sure you copy and paste this message so the people you tag will know the drill.

In no particular order:

Type the url itunes.com with a band name added to the end in your web browser to open the iTunes Store on the artists page: